Just a few days ago Hurricane Irene traveled up the east coast leaving destruction in it's wake. One of the areas hit hard was my hometown, Scotia, NY. This is the place I think of when I think of home. I remember being a kid and running down the street. I remember sitting on my Grandma's porch while it thundered and poured. I remember watching her tulips grow in the backyard knowing that soon summer would come.

Scotia is a small town. I walked to my elementary school and back - and it was only uphill ONE way :) There was a tiny movie theater and a neighborhood grocery store. And every day at a certain time (which I can't remember now, but let's say 5pm), the fire station would alarm.

There's a park in Scotia called Collins park. It's where I rode my bike, where I played on the playground, where I swam in the lake. And the best burger joint ever is there... Jumpin' Jacks. It consisted of two buildings. The burger part and the ice cream part. They have the best cheeseburgers and fries EVER. I always got 2 cheeseburgers. They are kinda small. But, Mmm, they are SO good. We'd get our food and go sit down at a picnic table under a wooden umbrella. Then we'd go get ice cream and walk down by the river and throw stones in.

When I was a teenager, I remember going there and sitting under the bridge. There were a couple of kids - I was not one of them, I was too scared - that would somehow get across to the middle of the bridge and jump off into the river.

This place is iconic. It's home. Since moving away in 2005 I haven't been there and I really miss it.

This is what it looks like now, after Irene: 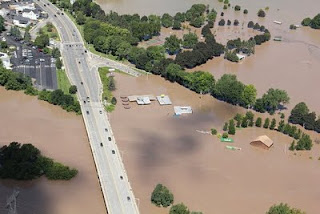 Jumpin' Jacks is on the right. You can see three rooftops and four "dots" closer to the road - those the wooden umbrellas. The park? Gone.

I hope they will recover.

What angers me the most is the people who say "Irene wasn't bad" or "All that hype and nothing happened". Maybe they should open their eyes and look around. Just because Irene didn't bring NYC to its knees doesn't mean that damage wasn't done.

I'm hoping to help the town of Scotia with some of the proceeds from my new release coming up. When I get some information, I'll pass it on.

Posted by Talia Jager at 9:11 AM 2 comments: Links to this post

I'm sitting on the balcony of a condo type place in sunny Florida, writing my next book. This is paradise - except for the occasional wasp that keeps flying nearby and scaring the crap out of me.

My husband works for a company that has a conference every year - usually in a nice vacation type spot. This year, it's San Destin, Florida. It's a huge resort area on the Emerald Coast. I was here a few years ago for a wedding and loved it. We came back to Destin, but not back to this particular resort. And now here we are. This has to be one of my favorite places on Earth - at least so far. Granted, I don't travel much and haven't been to Europe or any other continent :)

This is my dream. To own a small vacation home/condo on the Emerald coast. I can only hope that one day I sell enough books to pay of my debt and make this dream come true. Not just for me, but for the kids too. They love it here.

Posted by Talia Jager at 12:40 PM No comments: Links to this post

Sorry I haven't been blogging as much this summer. I've been focused on getting the first draft of my 6th book done and I just finished today! It's just shy of 64,000 words which means that after edits, it should be near 70,000. I closed it out and will set it aside for about a month. In that time, I'll work on book #5 which needs it's first edit.

Finding out we're pregnant again has also slowed me down a bit. The fatigue and the nauseousness has made staying up late and writing pretty rare. Hopefully the second trimester will bring some relief.

I'd like to get at least book #5 and #6 out before Christmas. If I'm lucky, book #7 - the sequel to The Ultimate Sacrifice will be out too.
Posted by Talia Jager at 9:49 AM 4 comments: Links to this post

Email ThisBlogThis!Share to TwitterShare to FacebookShare to Pinterest
Labels: ebooks, self publishing, writing, YA

Not too long ago, Heather Marie Adkins guest blogged her and released her book, The Temple.In only a short time, she has released another book, Abigail. 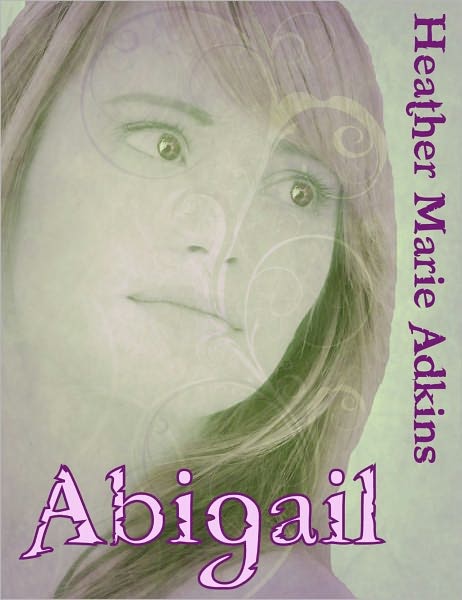 Summary:
When Abigail’s supposedly immortal faery mother is found murdered, her human father sells her in to slavery. Bought by a young and wealthy landowner named William, she is whisked away to a Grecian island to play caretaker for his baby sister.


However, the island has a deadly secret connected to Abigail’s past. Her budding romance with William is shattered by Abigail’s intimate, unwanted connection with the island’s faery prince. Meanwhile the faery king plans revenge upon the family. Abigail must join forces with the very race she’s sought to deny, to save the humans she has learned to love.
Buy it now!
Barnes & Noble
Amazon
Posted by Talia Jager at 12:48 PM No comments: Links to this post