Hey all! Hope everybody is enjoying the cooler weather and looking forward to the upcoming holidays. I just uploaded a new book, Falling For Fire. This is NOT a Between Worlds book, but I'm hoping you guys will love it anyway. It's about faeries. It's also the longest book I've written so far.

Being brand new, I need to get some reviews. If anyone is interested in reading it and leaving an honest review on Amazon, Goodreads, or anywhere else, please EMAIL me ( taliajager at att dot net ). I will email you a free copy of the eBook. I have a mobi file for Kindles and an ePub file for iBooks, Nooks, Kobo eReaders, etc. You MUST be able to read one of these two files. 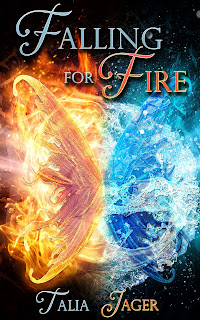 The fae had an old law—Love is forbidden between faeries of different Seasons. After a chance encounter at a secret party, the Winter princess, Aurora, and the Summer prince, Sorin, soon find their love will not be denied.
Posted by Talia Jager at 8:14 PM No comments: Links to this post

The Between Worlds Series Fun

I get messages almost daily about The Between Worlds series and I wanted to answer some questions and share some links.

I am currently writing the fifth book in the series. I’d say it’s about half way done. So when does that mean it’ll be released? Well, if I can get a little writing done every day, then I hope to have it written by January 2016. Then it just needs to be edited and formatted, which can take 1-2 months. Now if the holidays get in the way, it could take me a little longer.

Whose point of view will book #5 be in? Both Rylie and Sierra's.

Will this be the last book? I’m not sure. It’s the last book I have planned right now. But I have to admit, I LOVE these characters and I can’t see never writing for them again. So it is very possible there will be more or maybe spinoffs. I’m just not sure yet.

Want a free copy? Keep an eye here in a couple months. I always offer a free eBook in exchange for an honest review.

I do also have a Pinterest board for the series. I have a few pictures of the girls on the covers, a couple other characters, some celebrities that I'd love to play the characters if it was ever made into a movie. Pictures of the faery realm or things from the books. Check them out. Here are a few examples of what you'll find there:

How many of you know there are playlists for the books? A very good friend put them together for me. What is a book playlist? A list of songs that fits many of the scenes. You can listen as you read. Or just look over the list. Or make a playlist on YouTube with them. Or do like I do and whenever I hear "Ho Hey" I think of them all singing around the fire pit after Sierra gets her memories back.

3. 7 Things: Miley Cyrus
- Rylie and Kallan (back & forth between getting along and arguing)

4. Not a Bad Thing: Justin Timberlake
- Kallan and Rylie

5. For You I Will: Teddy Geiger
- Kallan and Rylie

7. Ours: The Bravery
- The new world Rylie is living in

8. Where Does The Good Go: Tegan and Sara
- Rylie dealing with Kallan mixed feelings

11. Beating Heart: Ellie Goulding
- Rylie and Kallan jump into the water *when the chorus hits.*

12. Almost Everything: Wakey!Wakey!
- Kallan about Rylie

16. Irridescent: Linkin Park
- Rylie watching the fight, it seems to move in slow motion for her when she realizes Kallan might not survive

17. Let her go: Passenger
- Kallan letting Rylie go despite his feelings for her

18. Coming Back For You Maroon 5
- Ending scene with Kallan watching from a distance.

1. Maps: Maroon 5
- Kallan coming to the human world to fight for Rylie

6. That Should Be Me: Justin Beiber ft. Rascal Flatts
- Kallan

7. Where Have You Been: Rihanna
- At the dance Sierra pulls everyone on to the dance floor

9. When I look at You: Miley Cyrus
- Sierra and Drake

10. I Knew You Were Trouble: Taylor Swift
-Rylie about Kallan when he causes tension with Adam

12. Not Over You: Gavin DeGraw
- Kallan and Rylie's feelings

13. Everywhere: Michelle Branch
- When Rylie sees Kallan everywhere in the beginning of the book.

17. Who You Are: Jessie J
- Rylie dealing with Oren's death and again struggling with being a Faery trying to decide what she wants

18. I Need You: M83
- Ending of the book Rylie's dream then wakes up and sees Kallan outside and goes outside and they kiss right as the tempo of the song takes off

1. Sweet Silver Lining: Kate Voegele
- Rylie with everyone expecting so much from her

2. Human: Christina Perri
- Sierra trying to deal with everything in her life, trying to make her relationship work with Drake, maintain her friendship with Rylie

3. They Don't Know About Us: One Direction
- Sierra and Drake

5. All of Me: John Legend
- Rylie and Kallan

8. Catch My Breath: Kelly Clarkson
- Rylie and the counsel

10. Wherever I Go: Miley Cyrus and Emily Osmett
- Rylie and Sierra talking before the wedding

14. Wedding Dress: Matt Nathanson
- Kallan showing Rylie their home as she walks around the house in her wedding dress taking everything in.

15. Mr. Know It All: Kelly Clarkson
- Rylie and the counsel

17. Are You Ready: Three Days Grace
- Rylie vs Satine

18. If I Die Young (Cover): Glee
- Everyone waiting for Sierra to wake up, she wakes up and she's looking at everyone and they ask is she remembers and she says no and that's when the song ends.

2. Dead In The Water- Ellie Goulding
- Sierra wakes up with no memory

4. How To Save A Life- The Fray
- Rylie's feelings

7. The Heart Wants What It Wants- Selena Gomez
-Sierra and Drake

15. Wildest Dreams- Taylor Swift
- Rylie's feeling about Kallan as she gets sicker and sicker, trying to hold on for the potion •Specifically in the song where Taylor sings, "I can see the end as it begins, my one condition is, say you'll remember me standing in a nice dress staring at the sunset, babe, red lips and rosy cheeks, say you'll see me again even if it's just in your wildest dreams."• I think when this chorus is sung, it fits with Rylie's hopes and feelings. She feels like she's only just begun to live the life she was meant to with Kallan and so her hope is if she doesn't make is that Kallan will think of her in his dreams.• There's others parts of that song that match what Rylie is feeling, but that part even more so.

18. Marry Me- Train
- Drake's feelings about Sierra when going to the Human realm with everyone. •It's all about one look and a person knows they are meant to be together forever, but first they have to get the nerve to even say hi. And that's Drake right now. He's got to start over with her if her wants forever with her•

19. Where I Come From- Passion Pit
- Human Realm trip/ healing the faery realm

21. For You I Will- Teddy Geiger
- Sierra and Drake

23. I Hate Everything About You- Three Days Grace
- Rylie and Drake Kidnapped

24. Waiting Outside The Lines- Greyson Chance
- Sierra's epiphany, then freezes everyone

26. Time After Time- Michelle Chamuel
- Rylie and Sierra, after her memory comes back

27. Bless The Broken Road- Racal Flatts
- Drake and Sierra, after her memory is back

- Bonfire, ending scene
Posted by Talia Jager at 8:36 AM No comments: Links to this post