When I started writing the Beyond Earth series, it was after the death of Lexa on The 100. The "bury your gays" trope was at an all time high. I promised my fans then and I want to renew my promise to my fans as I continue the series that I will NOT permanently kill off either main character, Everleigh and Akacia.

Now, because I'm a drama writer, I need to have drama, so things will happen to them. They may come close to death. They may get sick. They may die and be revived. They may switch bodies. But, in the end, all will be as it should be. That is my promise to you.

The first two books in the series are out (Without Hesitation and Painted Skies). I'm working on the third book and am already at 65k words...so I'm thinking there may be four books in this series. So, yes, be prepared for dramatic things to happen throughout this series, and I know this is a spoiler, but I promise to keep Akacia and Everleigh alive.
Posted by Talia Jager at 12:00 AM No comments: Links to this post 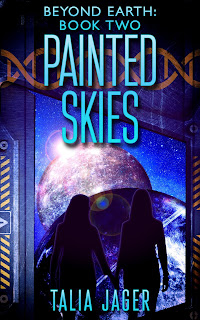 This is book two of the Beyond Earth series. Without Hesitation is book one and is free everywhere (except Amazon) right now. So if you haven't gotten hooked on this series, start now!!!!


Akacia and Everleigh have been apart for almost an earthmonth. Both still reeling from recent events, they try to get their lives back on track. They soon find out an evil from their past has resurfaced and their lives and home planet Valinor are in danger. Side-by-side once again, they find themselves fighting for love, peace, and their homes.

**This book is an LGBTQ sci-fi story with a female/female relationship.**
Posted by Talia Jager at 8:51 PM No comments: Links to this post

I'm not good at keeping up with blogging. I don't usually know what to write about and how much of my own books would people really want to know about. I don't like being pushy and scream: BUY, BUY, BUY!

Time is a precious thing. Between taking care of my family, house, and myself, it doesn't leave much time to write. I feel like my books are the priority when I do have that time, so my blog suffers. As does my social media.

It's so weird how I can write a book, but blank out when it comes to blogging or social media posts.

For those of you desperately waiting for updates on the 2nd book of the Beyond Earth series, I finished professional editing part 1 and sent it back to the editor. When she sends it back to me, I'll do my final edits while the cover gets made. In the meantime, I'm working on book 3 of the series and already up to 40k.

And yes, I will still be writing more in the Between Worlds series, the Gifted Teens series, Falling for Fire, and Touch of Death.

It amazes me how my favorite writers growing up could pump up books as quickly as they did. The Sweet Valley books, Christopher Pike's books, VC Andrews... how did they all write so quickly?

Spread the word. Follow me. Believe it or not just one or two authentic follows makes a lot of difference in the crazy world of algorithms. If you've read one (or more) of my books, PLEASE leave a review. THIS makes a HUGE difference in Amazon algorithms. It also allows me to promote my books on more places because they require a certain number of reviews.

I hope I don't disappoint any of you. Hang in there, the books are coming.
Posted by Talia Jager at 9:41 AM No comments: Links to this post

Enter this YA/NA Sci-Fi & Dystopian Giveaway for a chance to win books or an Amazon gift card. 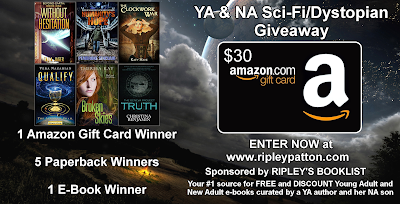 a Rafflecopter giveaway
Posted by Talia Jager at 12:58 PM No comments: Links to this post

I know many of you watch for updates. Lots of times I don't have one. I'm just writing. I never really know when a book will be ready. I don't know how those that have release dates know. At least indie writers. I write, rewrite, wait a month, read it, edit, read it again, edit some more, then send it to a couple of people. If they're happy with it, it goes to my editor. Then I have to make those edits and if I'm not sure about how I did, I send it back to her. Whenever she's done, I send it to my formatter. So the end of publishing a book isn't even something I control.

But I know you. I know you want to know what's happening in my little world. So, here are my updates:

Beyond Earth Series: Book Two - Working on 2nd draft. Up to 77k words. I really hope to have it ready to go to an editor this spring.

Between Worlds: Book SIX - Started a scene or two, haven't gotten far. I really want to, but I need to wrap up the Beyond Earth series first. This goes for the Spinoff of Lena's story as well. Not sure which will come out first. The spinoff or #5. We'll see.

Falling for Fire - I plan on this being a series. I love Aurora and Sorin. So this will be a series someday.

Same for Touch of Death. Definitely a series. Just not enough time to do them all.

Which leaves me with The Gifted Teens. There is a book four. I have written some on it. It takes place a couple years after the third book. I'm definitely not done with Daxton and Kassia, Mira and Zane, or Auralee and Noe.

As far as my other books, they're all basically standalones. I could make Secret Bloodline into a series, but not sure I will. The others have had their story told. Although when I do pay someone to edit Lost and Found, it will be getting a little bit of a makeover.

I do have many other ideas. Some medical ones like a teen diabetic, another about a teen who cuts, and an aliens on Earth (series??).

That's about it. I wish my fingers would type faster. I wish I had more time in the day to write. I wish I had more money to get things done faster. And sometimes life just gets in the way. I thought I would have the 2nd Beyond Earth series book out last year, but I took 2 college classes and was NOT prepared for the amount of work they took. Then I had health issues which are not over yet. Plus teaching the kids, being a wife and mother, and all that comes with it.

I can only promise that I will write until I can't anymore (and the way I love writing means I'll be dead for that to happen). It might take time for the sequels and new books to come out, but they will.

Thank you, fans, for your love and loyalty. I love hearing from you!!!!
Posted by Talia Jager at 9:14 PM No comments: Links to this post