Paradox - The Angels Are Here

Check out this book by Patti Roberts before book 2 comes out in November 2011! Only .99 cents! 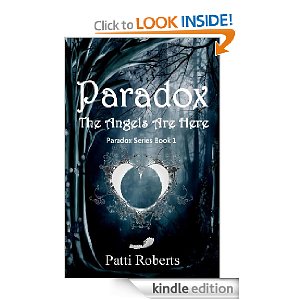 A little girl's world is turned upside down by a visitor, the Angel of
Death. She finds herself trapped in a nightmare, consumed by her
paralyzing loss and overwhelming grief.
Haunting visions and the untimely deaths of others are a constant reminder that life and death are only a heartbeat away.

She eventually befriends the unusual little girl who moves in next
door with captivating violet eyes and a profound knowledge of things
that far exceeds her tender years.

"Masks camouflage the faces of both good and evil. Keeps hidden what is a truth and what is a lie."

Lives - bound together by blood - forge an unforgettable trail of
heartbreak, loss and betrayal spanning over centuries to the present
day.


Buy it from Amazon now!
Posted by Talia Jager at 9:25 AM No comments: Links to this post

The second book in the Keegan's Chronicles series has been released. Conflicted is now for sale at Amazon, Barnes & Noble, and Smashwords. As many of you know, I enjoyed the first book, Coexist, so I couldn't wait to get my hands on this sequel. It was just as awesome as the first. If you haven't read Coexist, go read it and then read Conflicted. Go now...what are you waiting for? :) 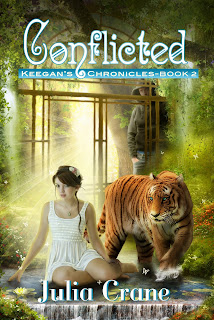 In the Elfin world, magic and destiny determine who will be together. "Chosen" pairs are fated to meet at the age of 18.

Keegan, however, is an anomaly. Having fallen in the battle between the Light and the Dark, she is only alive now due to Black Magic, and her bond with her Chosen is broken. She cannot remember Rourk at all.

For the first time, she feels like a normal teenager. She is dating Donald, her long-time crush, and everything seems perfect. But Rourk still feels their bond, and despairs for the woman he was always meant to love.

Keegan’s best friend Anna is determined to find a way to use her powers to return Keegan’s bond, no matter what it takes. The question is does Keegan even want it?
Posted by Talia Jager at 11:05 AM 2 comments: Links to this post

My fifth book, Secret Bloodline, is now live on Amazon, Barnes & Noble, and Smashwords. I'm still looking for five more people to review it. If you'd like to be in on that, please let me know!
Posted by Talia Jager at 8:26 PM No comments: Links to this post

Secret Bloodline should be out this week. Here's the cover - designed by Streetlight Graphics! They did an awesome job, as usual. 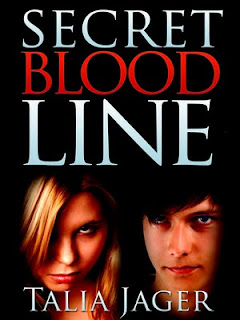 What sixteen-year-old Kairi doesn’t know is that vampires do exist and she’s one of them. She was left in foster care when she was very little and grew up away from her world. Then she began to change. Feeling out of place and confused, she ran away from her foster home.  A coven takes her under their wings and trains her. When she is told her parents didn’t just abandon her, but died protecting her, she sets off on a mission to find their killer.

And then she meets Aiden…a vampire hunter.

I will be gifting free copies on Amazon to the first 10 people who respond and agree to leave a review. Please respond in the comments section with your Amazon email OR email me at taliajager (at) att (dot) net OR message me through my author Facebook page. Once it is live on Amazon, I will gift the 10 copies. Thank you!
Posted by Talia Jager at 8:17 PM No comments: Links to this post

The Halloween Collection Has Arrived!

The Halloween Collection from the Indie Eclective is here!
ABOUT THE HALLOWEEN COLLECTION
The Indie Eclective: What is it, who are they, and why can they spell neither “eclectic” nor “collective” correctly? The Indie Eclective is an ensemble of authors operating under the assumption that Readers like Good Books. The Halloween Collection showcases spooky reads from nine very different authors. Whether you enjoy light or dark paranormal, YA or adult-themed genres, there’s bound to be a story to suit your tastes. Thanks for reading!
In this Collection…
Rhyn Trilogy: Origins, by Lizzy Ford: Gabriel’s fate as an assassin seems set until he meets a courageous half-demon child named Rhyn, whose plight rekindles the humanity he thought he’d lost.

Ralphie the Special Werewolf by P.J. Jones: Ralphie doesn’t want to get snipped, but his pack is tired of watching him defile the sofa cushions. Now, he’s got to find a mate by Halloween night—or else.
Sunwalker’s Kiss by Shéa MacLeod:  While searching for a magical bloodline, Sunwalker Jackson Keel discovers magic of a different kind.
The Village of Those Who Touch The Dead by M. Edward McNally: “All obligations will be paid. There are no exceptions.”’
Haunting in OR 13, by Alan Nayes:  Halloween never frightened Sara McCaffe, until she stepped into Operating Room 13!
To Taste of Shimmering Revenge by Jack Wallen: A vampire is awakened after four hundred years only to find his kind embarrassed and shamed by the rash of shimmery, hunky vampires on the big screen. His revenge will be sweet and tasty.
Magickal Vendetta by Heather Adkins - Revenge is a dish best served up in a pink saucepan for accident-prone blood witch, Gretchen.  By harnessing the power of Halloween, she hopes to break the bond with the soulmate who did her wrong.
From the Keegan’s Chronicles series:  Haunted House by Julia Crane -  Keegan, Lauren, and Anna find much more than they bargained for during an innocent trip to a commercial haunted house.  Someone long dead awaits them on the second floor…
From the Gifted Teens series: Mind-Blower by Talia Jager - Kassia and Daxton’s romantic picnic is interrupted by the arrival of creatures bent on her destruction.  Will her powers fail her when she needs them most?
Available now on Smashwords.
Coming Soon to Amazon and B&N!

Posted by Talia Jager at 11:19 AM 2 comments: Links to this post