Mesmerized was written by Julia Crane and Talia Jager. Buy it now on Amazon, Apple iTunes, Barnes & Noble, or Smashwords. Or buy it in print at Amazon. 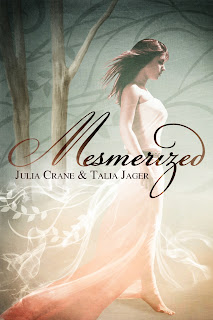 Seventeen-year-old succubus Lily Anderson can’t have a normal life: She isn't allowed a boyfriend, she has no friends, and school is just one mess-up after another.

Lily’s parents send her away to the prestigious Emerson Academy. It doesn’t appear to be any different from the others. That is, until she meets her roommate, Hannah, and a blue-eyed boy named Jake.

Lily makes an almost deadly mistake, and Jake has a mysterious past that has come back to haunt him. Together, they must go on the run from things neither of them understand in order to save the people they love—and each other. But, Jake’s foe is more dangerous than they realized, and it will take the help of friends and family to save the man Lily loves.

She must learn to use her powers for good before it’s too late.

WARNING: This is a mature YA. Due to sexual content and some language it is not recommended for younger teens.